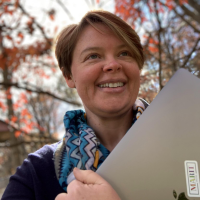 Jen is a member of the Design & Web Services team in NC State's central IT unit. She does training, support, maintenance, billing, and occasionally something fun with design and/or dev. You can hear Jen as color commentary to "help" Brian DeConinck on the WPCampus podcast. Tweet me on the twitters: @ncsumarit.

Folks, it’s been two weeks since WPCampus 2019 and we’re still so tired. So tired that Jen and Brian forgot to introduce themselves and forgot to say any of the stuff we’re supposed to say at the end of the episode. WPCampus 2019 was fun, informative, and exhausting. Some day we’ll recover. In this episode […]

Automated testing. We all know we should be doing it but are you? For many of us it seems like a daunting addition to our routines and something we can always get to later. But somehow later never comes around. In this episode, host Jen McFarland chats with Steve Persch, Lead Developer Advocate at Pantheon. […]

In higher ed, summer means fewer students, less traffic, and shorter lines at the best lunch places near campus. For those of us who use WordPress in higher ed, it also means major WordPress news and the final push to prepare for the in-person WPCampus event! In this episode, WPCampus members Jen McFarland and Brian […]

Podcast: The Schedule for WPCampus 2019

Coming soon to lovely Portland, OR is the 2019 WPCampus conference! The schedule of sessions is now available and in this episode, WPCampus members Brian DeConinck and Jen McFarland are joined by WPCampus 2019 Program co-chair Eric Sembrat. Eric reviews some of the content planned for this year’s event, and some ways in which folks […]

Beyond the conferences, online events, and phenomenal swag, WPCampus is a community — one made up of a varied and diverse set of people. With a focus on building that community, the WPCampus Diversity & Inclusion Interest Group recently completed work on a Diversity, Equity, and Inclusion statement. This statement reflects a goal of creating […]

The WPCampus community is delighted to announce our official Diversity, Equity, and Inclusion statement. This statement came from a desire by the WPCampus leadership to prioritize issues of equity and diversity. As many of you know, accessibility is a major focus for our initiatives and events. We believe that accessibility can only be achieved through […]

Podcast: After the Gutenberg Audit

The WPCampus Podcast is back! If you’re in higher ed, you have to care about accessibility. There’s no getting around it: the digital experiences we provide to our communities have to be accessible to everyone. So when WordPress 5.0 made the “Gutenberg” block editor the default editing experience — and when many in the WordPress […] 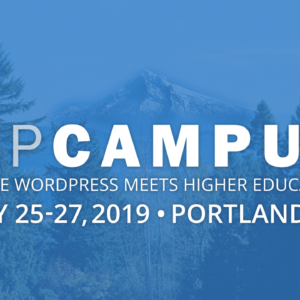 We’re excited to officially announce WPCampus 2019! Join us July 25-27 at Lewis & Clark College in Portland, Oregon. About WPCampus 2019 WPCampus is a three-day conference event filled with sessions, networking and social events. It will cover a variety of topics, focused on accessibility and WordPress in higher education. Visit the About page to […]

Blog: WPCampus 2019 Call for Proposals: Save the Date!

Hello WPCampus friends! We’re excited to announce that our Call for Proposals for this year’s conference will be opening soon! We’re looking forward to another year of wonderful ideas, demonstrations, brainstorming, and benchmarking. Session Topics As in past years, we’re looking for a variety of topics on anything that might bring value to our community. […]

WPCampus aims to prioritize and promote diversity in the general community, and in its events. One of the best ways to ensure a broad representation – and to encourage even more – is to have diverse speakers.

The first round of training is complete. The second round has 2 dates: January 7 or 10. You must register to attend. Join us!

Podcast: Multisite Use Cases, with CampusPress

The last couple of episodes of the podcast focused on big changes to WordPress—Gutenberg and GDPR privacy tools. It’s easy to get caught up in the energy and the drama of changes like that, but they’re not really why people use WordPress in higher ed. So why do we use WordPress? What makes it such […]

When Matt Mullenweg announced in December 2017 that Gutenberg and WordPress 5.0 would be ready in just a few short months, we sat up and took notice. Knowing the landscape of our institution – and higher ed’s proclivity for denying change – we started making plans. From the beginning we were thinking about the full…

When WordPress 5.0 is released later this year, the “classic” Visual editor that we’ve known for over a decade will be replaced by a new editing experience, called Gutenberg. The new editor will mean lots of changes for how we think about and interact with WordPress—as content creators and as developers. This episode features WPCampus […]

Universities generate a lot of news: awards, research highlights, student profiles, athletic victories, and more. At its heart, WordPress is still a great blogging platform, which makes it the ideal place to publish and promote your campus news. But the decentralized reality of higher ed can make it more complicated than you expect. Today, we’ll […]

Session: The Making of a Web Team

A year ago our web shop went from two harried full-timers to three full-time staff, one part-timer, a couple interns, and a partnership with another unit. The two people whose idea of communication meant yelling across the hall at each other suddenly expanded to 6+, and with it came the inevitable requirements of management, and…

The campus web ecosystem is often very messy. You may have hundreds or even thousands of distinct web properties, and each one has its own history, its own personalities, and its own reasons why it’s special and has to be different. This episode features WPCampus community members Brian DeConinck and Jen McFarland, and one of […]

When we talk about WordPress in higher ed, we often talk about technology—themes and plugins, server configurations, etc. But at some point, the developers have to let go and the content creators take over. In higher ed, that brings with it a whole new set of challenges. This episode features WPCampus members Brian DeConinck, Jen […]

In May 2016, WPCampus organized a groundbreaking survey of educational institutions asking how they’re using WordPress. We’ll be discussing the results with Shane Pearlman of Modern Tribe, who took the lead organizing and conducting that survey. This episode features WPCampus members Brian DeConinck, Jen McFarland, and Shane Pearlman. Episode Audio

WordPress has a nifty little plugin that allows it to take on the role of community building and social networking and that tool is called BuddyPress. Today in the podcast we’ll talk to a developer, contributor, and user of BuddyPress and discuss the power and pitfalls that come with BuddyPress for HigherEd. For this episode, […]